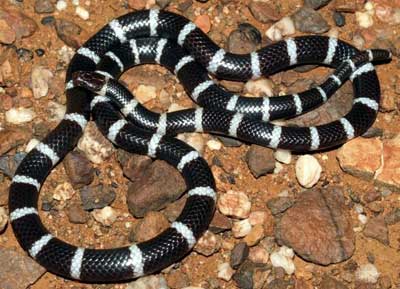 The Bandy-Bandy (Vermicella annulata) is a spectacularly striking black and white banded snake.

The alternating colour pattern of black and white rings can play tricks on the eyes of potential predators, making it difficult to see which direction the snake is going, and which is the head or tail end. This confusing trick is called 'flicker fusion'.

Bandy-Bandys are nocturnal and are sometimes seen on the road at night especially after rain.

Bandy-Bandys are believed to live exclusively on a group of snakes called blind snakes. They can swallow prey almost as large as their own body.

Bandy-Bandys grow up to 60cm long.

The young hatch from soft-shelled eggs.

There are five species of Bandy-Bandy and four of them live in the Northern Territory.

The number and width of the black and white rings varies between males and females, and geographically.

Bandy-Bandys belong to the same family as Australia's deadliest snakes. They have venom glands; however they produce very little venom and are unlikely to bite humans.