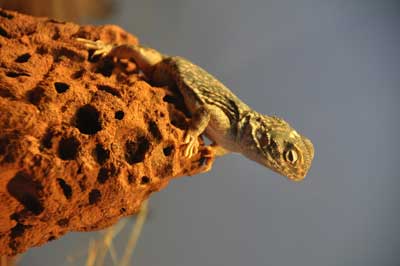 The Central Netted Dragon (Ctenophorus nuchalis) is a medium-sized terrestrial lizard with a pale reddish-brown to bright orange-brown body. It gets its name from the dark-chocolate brown, reticulated (net-like) pattern which overlays its head and body. This pattern acts as camouflage, helping the lizard to blend in with its habitat to avoid predators. Its limbs are short and strong, with long toes and strong claws, which allow it to run at great speeds and dig burrows.

The head is short and blunt in comparison to other iguanids and agamids, thought to be related to its herbivorous and burrowing behaviour. The ears are exposed, and a row of enlarged scales curves under each eye. Small spines surround the head. It has a low crest along the top of the neck, a narrow vertebral stripe along the length of the body, and the scales of the body are small and smooth to the touch.

Central netted dragons are burrowing, diurnal (day-active), and terrestrial (ground-dwelling), spending their days basking on logs, stones and termite mounds. Like the majority of reptiles, they rely on their environment to regulate their body temperature (that averages 36.1°C).
They are found throughout the desert plains of Western Australia, the Northern Territory, Western Queensland and New South Wales. They are abundant in open, sandy areas with sparse vegetation, and surveys have found this species increases in abundance in grazed areas and likewise may increase in cleared or burnt areas.

This species is tolerant of habitat degradation caused by grazing and is under no major threats at this time.

Adult males measure around 25 to 28cm from snout to tail, with about 10cm being snout-to-vent length, and the tail making up the remainder of the length.

Predators of the central netted dragon include larger reptiles, such as goannas and snakes, and birds of prey, as well as the red fox and cats.

They are sexually dimorphic, with males being slightly larger overall and having a larger head in relation to their bodies compared to females. This dragon is relatively short- lived in the wild, perhaps living two to four years.

Females are known to lay two or three clutches of two to six eggs, typically during spring and summer depending on the location and conditions. During the breeding season, male dragons actively defend territories and often fight with other males for dominance.

They have annual lifecycles, with adults predominating during the breeding season and juveniles predominating in other seasons. Juveniles typically attain sexual maturity after winter at five to six months of age. The timing of reproduction is dictated primarily by rainfall.

As with many of the dragon species, central netted dragons will communicate with other members of their species by bobbing their heads and waving their legs. Males can be quite territorial, and will use these display signs to intimidate rival males, in an attempt to ward off any potential takeover bids.

They are known to have several burrows, typically six to eight, often constructed at the base of stumps or spinifex grasses. These tend to be relatively shallow, dead-end burrows in different parts of their home range, and are used primarily as nocturnal retreats and for predator escape. They will often back-fill the entrance to this burrow to prevent entry by predators, and to keep the heat out. They prefer perches with high vantage points, such as termite mounds (which also serve as a source of food for this insectivore), dirt hills, logs, and fence posts.