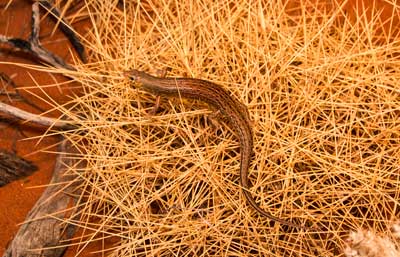 Well known for its unusual night-time foraging behaviour, the panther or leopard skink (Ctenotus pantherinus) is reddish-brown in colour and has many rows of darkly outlined white spots running along its body.

The leopard skink is reported to occur in spinifex, semi-arid and arid woodland, rocky areas, scrub and grasslands habitats.

Unlike other Ctenotus species, the leopard skink is active by both day and night, adapting to foraging in the cooler temperatures of night in order to exploit water-rich termites as a food source.

Identified threats include habitat fragmentation and degradation caused by the clearing of its habitat, grazing and badly managed fire regimes, as well as predation by foxes and cats, and drought.

Breeds during spring or summer, laying up to 11 eggs.