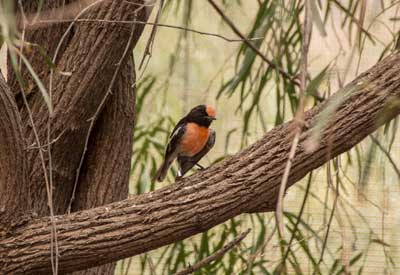 The Red-capped Robin (Petroica goodenovii) is the smallest of the red robins. It has an intense crimson cap as well as crimson breast.

Red-capped robins rarely sit still for long. They perch on a vantage point and dart to the ground to snatch prey items; flying up to a new vantage point only to duck to the ground again and back up. While perched they often give a quick flick of their tail and wings.

They are found right across the central regions of Australia from the west coast to some of the east and southern coastal regions. They avoid the heaviest rainfall areas.

Feral cats, butcherbirds, birds of prey, pythons. Robins will protect their nests and chicks by trying to distract intruders; they will even feign a broken wing.

The nest is a beautiful compact little cup (the smallest of all the robin nests). It consists of fine strips of grass and bark, neatly bound with spider web. To camouflage the nest, green and silver pieces of lichen and bark are attached by cobwebs to the outside. Robins usually breed after rain in desert Australia. Laying two eggs with chicks staying in the nest for two weeks. They live in pairs or small family parties of three to five birds after breeding.

The red-capped robin is one of the most brightly coloured birds in the Australian desert.