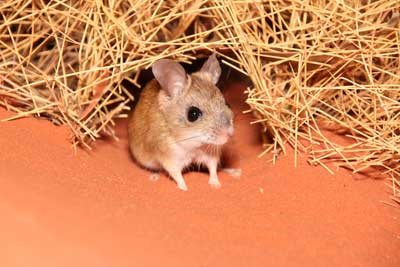 Spinifex hopping-mice (Notomys alexis) have large eyes and ears, big back feet, long tufted tails and move with a hopping and galloping gait.

Spinifex hopping-mice are nocturnal and stay hidden during the heat of the day. Like many other desert mammals, during dry times, they can survive without drinking. Their very effective kidneys absorb every drop of water from their waste. They have solid urine!

Spinifex hopping-mice live in the sand country of Central Australia. They avoid the heat of the day by sheltering in a deep, humid burrow. Their burrow is a horizontal tunnel, about a meter underground, with several vertical shafts to the surface. Entrances are well concealed under clumps of grass.

Unlike rodents living in less harsh environments, those living in areas of infrequent rain cannot rely solely on grain as a food source. As a result most desert rodents are omnivorous and have a varied diet that also includes leaves, shoots, roots and insects.

Spinifex hopping nice grow 7 to 8cm in length and live for four to six years.

Spinifex hopping mouse numbers fluctuate greatly and population explosions often follow periods of heavy rain. They are placental mammals and pregnancy lasts 38 to 41 days. The female usually raises three or four young which are weaned at four weeks and sexually mature at two and a half months.

Spinifex hopping mice have been known to migrate up to 15km towards rain.