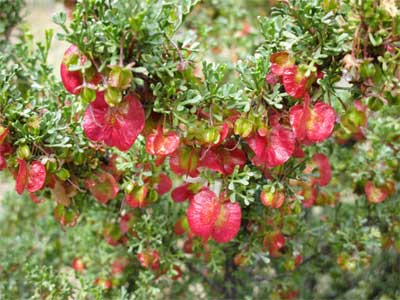 Densely branched shrub which can grow to 1.5m in height. The flowers are small and inconspicuous but the fruit of this plant is a brilliant reddish capsule with three wings around the outside.

Brilliant hopbush is mainly found in South Australia but also has populations in western New South Wales, the temperate arid zone of Western Australia and an isolated patch in the Diamantina National Park between Boulia and Winton in Queensland.

These beautiful plants can be found near the Nocturnal House on the boundary between the Sand Country and Woodland habitats.