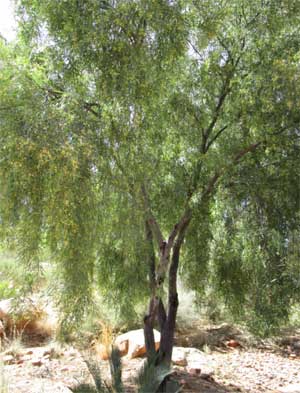 Tree usually 5 to 8m high with long, weeping branches giving it a willow-like appearance. The bark is dark brown and rough.

The round, cream to pale yellow flowers appear in autumn and are followed by a woody pod. The seeds are dark brown with a hard-outer coating and feature a bright red aril (an appendage which grows from the seed stalk). The aril is often used to attract ants which transport the seeds underground and plant them.

This plant suckers readily and is often found growing in small colonies as a result. It is typically found in areas with reliable water such as around dams, on creek banks and on low lying land subject to occasional flooding.

There is a large specimen located in the visitor centre courtyard.