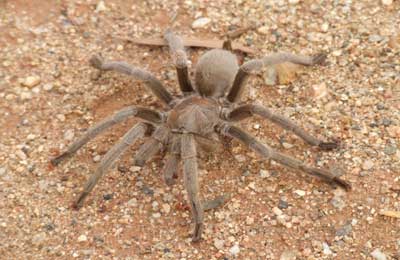 The Barking Spider (Selenocosmia stirlingi) is large and hairy. As with all spiders it has two body segments, eight legs and two palaps at the front that are used for touching and moving prey.

Barking Spiders are primitive spiders called Mygalomorphs (which means 'mouse like') and have gill-like lungs that require humidity. They are built for digging and spend most of their life in the moist underground.

The deserts are prone to flash flooding and Barking Spiders live in burrows with leaky rooves. The hairs on their body trap air bubbles during flash floods and the air pocket prevents them from drowning.

Barking Spiders have brush feet with claw tufts and a film of oil produced from a special gland which gives them a suction cup ability to climb smooth vertical surfaces.

Barking Spiders hunt insects, lizards and frogs from the entrance of their burrows.

Females may reach a body length of 6cm with a leg span of 16cm and powerful 1cm long fangs.

Females may live up to 20 years. Males usually die after mating at around 5 years of age.

After summer rains males approach the female's burrow, enticing them out to mate. Several days later the female lays about 50 eggs into a sac, which is stored in the burrow and protected by a tough cover of silk.

Spiderlings have been observed feeding on insects provided by their mother, indicating a degree of maternal care. They leave home a year after hatching.

Barking Spiders are Australia's Tarantulas as they belong the family Theraphosidae. They are also known as Bird Eating Spiders as, occasionally, young birds have been taken by them from nests on the ground.

Barking Spiders have no teeth to chew their food with, so they rely on their venom to liquefy their prey and use their sucking stomachs to draw in or ''suck" up the meal.