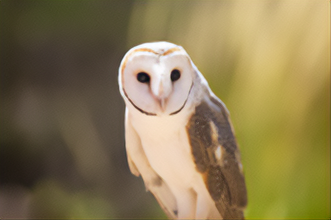 The barn owls unusual facial disc helps them locate their prey. It captures and focusses sound into its ears which are positioned, one slightly above the other, next to the eyes. Their hearing is so acute that they can capture a mouse in total darkness.

When surprised in its roost or nest barn owls react by crouching, spreading wings, fluffing feathers and hissing. If approached by an intruder they will stand bolt upright and look as slender as possible (like a stick) eyes slightly open - "I'm watching you".

Barn owls are found on every continent in the world except Antarctica.

Barn owls hunt small mammals and geckos in the darkness and silence of the night. They regurgitate the unwanted bones, fur and skin of their prey as pellets that are covered with sticky mucous designed to protect the bird's throat when they are being coughed up.

Predators of barn owls include wedge-tailed eagles and cars. Nestlings are vulnerable to feral cats and pythons.

Barn owls are opportunistic and breed at any time of year when food is in good supply. They lay up to three eggs that hatch after 33 days and young fledge between seven to nine weeks of age.

Owl eyes are so big that there's no room in the skull for muscles to move them. They make up for this by having a head that will turn 180 degrees. They can move their head in almost any direction without moving their body.

For centuries owls have been regarded as symbols of wisdom. Perhaps it's because of their habit of sitting still, listening to all that's happening and swivelling their head to give their full attention to everything around them.