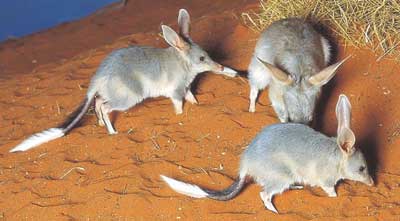 The Bilby (Macrotis lagotis) is a nocturnal marsupial and has long, silky blue-grey fur, ears like a rabbit and a beautiful, bushy black tail with a white tip.

Bilbies are nocturnal and have powerful forelimbs and strong claws for digging. Their vision is poor, but their sense of smell and hearing are acute. They rarely need to drink.

Bilbies live in the sand country; they prefer open country with a mixture of bare soil and grass clumps.

The bilby is classified as vulnerable as it has disappeared from much of its former range. Many factors have contributed to their decline including competition from feral cats and foxes, land clearing and the reduction of Aboriginal burning practices.

Bilbies are omnivores; they scratch around at night for seeds, grubs, bulbs, fruit and insects. When looking for food they dig with their front legs and then sniff in the hole with their long nose.

Predators of the bilby include dingoes, wedge-tailed eagles and feral cats and red foxes.

Males grow up to 2.5kg and are larger than females which gown up to 1.3kg.

Bilby births usually occur March to May but can occur any time after rain. Litters of one or two stay in the pouch for 80 days. The female’s pouch opens backwards so that the young do not get covered in dirt as the female scratches for food.

Until the turn of the century the bilby was one of Australia’s most widespread marsupials, inhabiting 70% of the Australian mainland. It lived in a variety of habitats, such as along rivers, in mulga shrub land and spinifex sand plains. Today, it is mostly restricted to scattered colonies in the desert country northwest of Alice Springs. There is also an isolated colony near Boulia in Queensland.

Bilbies have back legs that look like those of a kangaroo, but bilbies don’t hop. They gallop like a horse when they need some speed.
The sound they make is a cross between a grunt and a squeak.