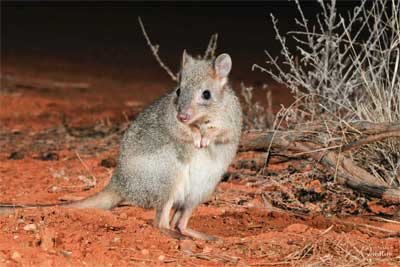 The Brush-tailed Bettong (Bettongia penicillata) is a small marsupial in the kangaroo family. The body is greyish brown above and paler below. It has a long tail with black crest along the end half. The underside of the tail is light brown.

Open forests and woodlands with understorey of thick grass or dense low shrubs.

The main threats are habitat loss / degradation, and predators such as cats and foxes.

The brush-tailed bettong can breed all year round if the conditions are favourable. The female can breed at six months of age and give birth every three and a half months. A single joey is born after a gestation period of about 21 days. The pouch life is about three months. Its lifespan in the wild is about four to six years.

The brush-tailed bettong is also known as a woylie.

They build a small nest from sticks and leaves under a bush or at the base of a tree, for shelter and protection.