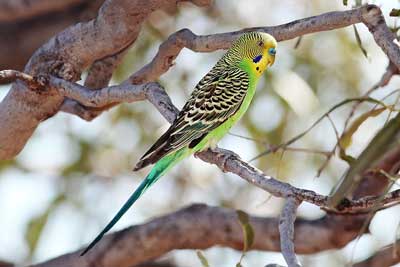 Budgerigars (Melopsittacus undulatus) are small bright green parrots. You generally hear them before you see them. Other names include budgerigar and shell parrot.

Budgerigars are social. Often seen in small groups and at times huge flocks in there thousands. They dart across the sky twisting and turning in unison and making lots of noise. This erratic and swift flight confuses aerial predators like the Australian hobby (Falco longipennis) and peregrine falcon (Falco peregrinus).

They are highly nomadic and their movements and breeding appear to follow the seeding of grasses throughout the arid zone.

Budgerigars are common and possibly the most numerous parrot species in Australia.

Aerial birds of prey such as falcons as well as introduced feral animals likes cats are the main predators.

Budgerigars nest in the hollows of gum trees. Any time after rain, they quickly raise several broods of up to four to eight young. The female incubates the eggs for 18 days in the hollowed out trunk or tree limb, young leave the nest after 30 days. These population explosions force the birds to disperse as soon as the country dries.

Budgerigars or budgies as they are commonly known, are the most widely known of all the parrots as it is a popular pet throughout the world. Blue budgerigars do not exist in the wild as this is a genetic mutation bred into captive populations.

Certain parts of the budgerigars plumage reflect ultraviolet light, which may enhance is bright colours and play a role in mate selection.