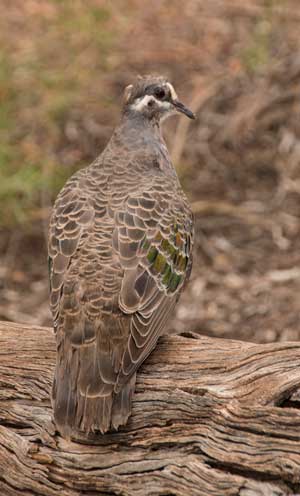 As its name suggests, the Common Bronzewing Pigeon (Phaps chalcoptera) has a beautiful iridescent patch of metallic-coloured feathers on the outer part of its wings. They are large, bulky-bodied pigeons with small heads. Surprisingly for their size, they are very fast flyers - amongst the fastest birds in the bush.

Bronzewings are found across a diverse habitat and temperature range, showing how adaptable these birds are to almost any environment they find themselves in, as long as food and water are adequate. They can also breed all year round to take advantage of good conditions and use a vast array of nesting sites.

Common bronzewings can be found in a very diverse range of habitats across Australia. In the Australian deserts they are found in mulga country, arid scrubs and mallee.

They are not threatened or endangered in the wild but are not as common in the desert regions as they are closer to the coast.

Bronzewings can be seen in small parties or alone, pecking around on the ground foraging for seeds from native grasses and shrubs such as acacia and cassia.

Larger aerial predators such as goshawks (Accipiter spp) and peregrine falcons (Falco peregrinus) could catch bronzewings while in flight or when they were drinking from waterholes. When feeding on the ground, bronzewings are vulnerable to feral cats and red foxes.

Common bronzewings can breed any time of the year if conditions are suitable (but mostly from August to December). During courtship, the male puts on a bowing display where he bows his head and chest low, partly fans his tail and shows off his iridescent wing feathers to the female. The female lays tow white eggs per clutch. Incubation is 16 days.

Bronzewings build a rough platform of slender twigs as a nest, which are sometimes quite flimsy looking. The location of the nest ranges from low to very high, usually on a thick branch or fork, mistletoe clump, shallow hollow, stump-top, or on top of an old nest made by other birds such as crows or babblers.

The call of common bronzewings can range from a deeply resonating, mournful whoooo when advertising for a mate, to a short soft whoo-hoo-hoo when displaying.