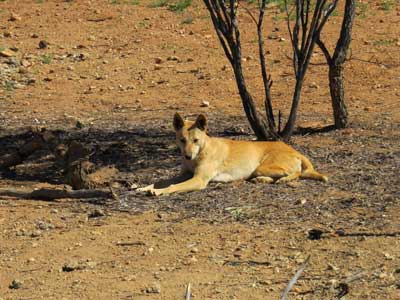 Dingoes (Canis lupus dingo) have pricked ears, bushy tails and a distinctive trotting gait. Their coats are typically ginger but some are sandy-yellow, red-yellow or occasionally black and tan. Most have white markings on their feet, tail tip and chest.

Dingoes don’t bark, they howl. They have three different types of howls: moans, bark / howls and snuffs. Howling is used for long distance communications to attract pack members and repel rivals. Although dingoes are often seen alone, many belong to socially interacted packs whose members meet every few days.

Dingoes are found in all habitats in Central Australia.

Young dingoes are preyed on by wedge tailed eagles.

Dingoes grow up to 60cm high and weigh up to 15kg.

Dingoes breed once a year. The females come on heat for a few days around the middle of the year and the pups are born nine weeks later. The young stay with their mother until the end of their first summer to learn to hunt.

The dingo is a primitive dog that evolved from the Plains Wolf of India. It is believed that Asian seafarers brought dingoes to Australia 4,000 to 6,000 years ago.

There are around 200,000 dingoes in desert Australia. Twenty per cent are believed to be domestic dog hybrids. Sadly, they are absent over much of their former range in Victoria, New South Wales and South Australia.