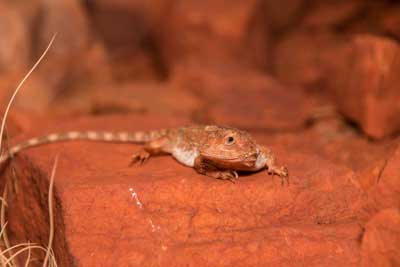 The Earless Dragon (Tympanocryptis tetraporophora) is one of nine species of the genus Tympanocryptis, an endemic Australian ground dwelling dragon lizard characterized by the absence of external ear structures (tympanum).

Earless dragons are so named due to their ear drum being covered by scaly skin.

The coloration of the eyrean earless dragon is pale grey or fawn to reddish brown with variable body patterning. Pale vertebral and dorso-lateral stripes are absent or scarcely distinct. Dorsal pattern is brown above, a broad pale vertebral stripe and two narrow pale stripes on each side. Females lack these pale dorsal longitudinal stripes more often than males with some females having almost no body patterning at all. Some females have distinct grey band at the back of the head. There is a series of four to six darker crossbands on the body, strong between the dorso-lateral stripes and much weaker below. Dark-brown bands are visible on the legs and the tail scales are strongly keeled and the tail tapers to a rounded tip. Banding on tail does not extend to ventral surfaces. Ventral scales are weakly to strongly keeled. The nasal is separated from the upper labial by four to six scales. Keeled scales are on the top of the head and back with scattered enlarged keeled scales mainly on rear of head and neck. The colour of the mouth and tongue is pink.

The eyrean earless dragon can be found in a broad range of habitats from barren stony desert plains and hummock grasslands. This species is also found in earth cracks in inland river floodplains. They have been observed to climb between one to 2m in low shrubs.

The eyrean earless dragon (sometimes referred to as the long-tailed earless dragon) has a vast distribution range within Australia from the arid interior of South Australia, Queensland and New South Wales, to tropical grasslands of the Gulf Region in Northern Queensland and Northern Territory. This species is often seen sitting on the ground or on clods of earth along the side of the road in arid and semi-arid areas of Australia. They are day active in the warmer months on stony downs amongst shrubs and hummock grasses.

The eyrean earless dragon is not endangered.

Predators of the eyrean earless dragon include other reptiles such as legless lizards and snakes. During the spring months when out in the open or on the sides of the road, they are also the prime targets for wedge-tailed eagles as they make a good sized meal for their chicks.

Insects compose most of the diet of the eyrean earless dragons. These include termites and ants and other arthropods (such as spiders).

The eyrean earless dragons deposit their eggs in burrows. Males and females become sexually mature at a snout-vent length of approximately 42 and 46mm respectively and reproduction occurs between early spring and mid-autumn.

Clutch size ranges from one to14 with an average clutch size of eight.

As is common in dragons, this species’ communication is primarily conducted using visual displays focused on push-ups and head-nods, particularly by those competing for territories and mates.