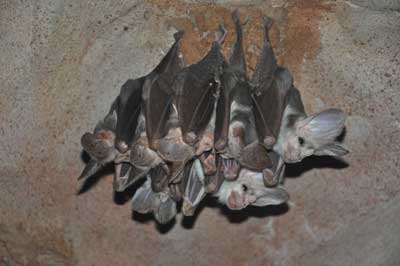 The Ghost Bat (Macroderma gigas) also known as the false vampire bat is a bat native to Australia. The bat is named for the extremely thin membrane of its wings that makes it appear ghostly at night. Ghost bats have grey fur on their backs and pale grey or white fur on their undersides. They have long, narrow wings, but no tail, averaging 11cm in length. Females are generally smaller than males. Ghost bats have large ears for long distance hearing, and very sharp teeth so they can attack prey.

The ghost bat was once widely distributed throughout Australia, but over the past 10 years, researchers have failed to find evidence of the species in areas it had once inhabited. This scattering into small sets of populations greatly raises the threat of extinction to the species.

Hunting occurs via a sit and wait technique three to five hours after sundown. Although the ghost bat has astoundingly good vision, echo location is utilised to directly locate approaching prey. Once located, the animal is held down via the thumb claws and killed by a single bite to the neck.

The largest threat to the ghost bat is loss of roost sites and habitat alteration.

The ghost bat has an average body length of 100 to 140mm and weight of 130 to 170g, making it one of the largest micro chiropterans. With ears that consist of nearly half the length of the face, large eyes, and strong curved claws; the lower jaw juts out slightly farther than the upper and houses 26 large, robust teeth. The wing span is approximately 0.6m. The overall size of the females is smaller than that of males, although certain body parts, including fingers and tibia, are larger in the female.

During the breeding season, late October to early November, female bats congregate in groups and give birth to a single young.