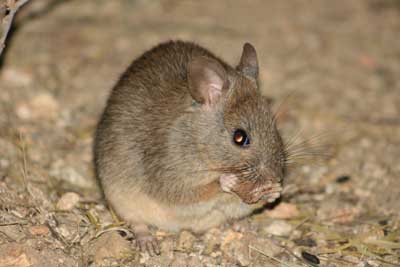 Greater Stick-nest Rats (Leporillus conditor) have yellowish-brown fluffy fur with white markings on their hind feet. They have large eyes and a blunt snout and rest in a hunched posture.

Greater Stick-nest Rats are nocturnal and build communal nests, to shelter in and hide from predators. They have incisors that constantly grow to enable it to eat hard seeds and carry and chew up sticks for building its nest.

When Greater Stick-nest Rats lived on mainland Australia they lived in the desert woodlands.

The Greater Stick-nest Rat is critically endangered as they are extinct on the Australian mainland. Many factors have contributed to their decline including competition from feral cats and foxes, land clearing and the reduction of Aboriginal burning practices.

Stick-nest rats are seasonal breeders; they mate in summer and average two young. The young stay within range of mother then males disperse at maturity.

Greater stick-nest rats get most of their water requirements through their diet of succulents, leaves, and fruit.

They build communal nests up to 1m and 1.5m in diameter are constructed of woven sticks and branches meticulously chewed to size. A nest of grass is constructed in the centre of the piles and tunnels lead from this to the perimeter. The construction is added to by succeeding generations and very large nests may contain communities of 10 to 20 animals.

The only known population of this species now exists on the Franklin Islands.