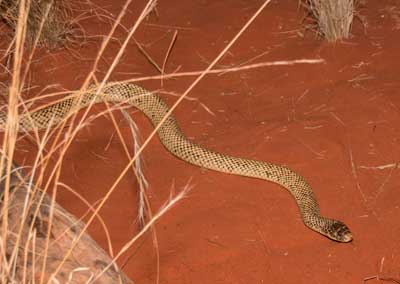 The colour of the snakes differs from area to area within their range; mulga snakes can be a light brown colour in the desert to a dark, brown-blackish colour in the cooler regions of Queensland, South Australia and New South Wales. Mulga snakes are robust, with a wide head and smooth snout.

The mulga snake venom consists of myotoxins. The lethal does is 2.38 milligram per kilogram subcutaneous. Its venom is not particularly toxic to mice, but it is produced in huge quantities. The average tiger snake produces around 10 to 40mg when milked. By comparison, a large king brown snake may deliver 150mg in one bite.

Black snake anti venom is used to treat bites from this species, after a venom detection kit has returned a conclusive result for mulga snake envenomation, and there are signs that antivenom use is required.

Venomous snakes normally only attack humans when disturbed. Mulga snakes have, however, been noted to bite people who were asleep at the time.

Mulga snakes occur in most states of Australia except for Victoria and Tasmania. Its range includes all of the Northern Territory, most parts of Western Australia, Queensland, New South Wales and South Australia. It may also be found in the western parts of the Australian Capital Territory.

The mulga snake primarily preys on lizards, birds, mammals and frogs. It is well adapted to eating other snakes, including all venomous snakes.

Mulga snakes are large, venomous snakes growing up to 2.5 to 3m in length in the largest specimens, although 1.5m is a more typical length for an average adult. A good-sized adult mulga snake of 2 to 2.5m length can weigh 3 to 6kg and mulga snakes are often heavier than the co-occurring taipans.

Female mulga snakes produce a clutch of around eight to 20 eggs, which may be laid in a disused burrow or beneath a log or rock. There is no maternal care for the eggs once they have been laid. Eggs take about two to three months to hatch, after which time the newly hatched snakes must care for themselves.