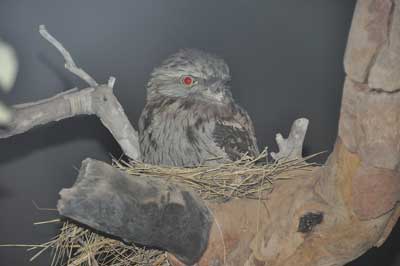 Tawny frogmouths (Podargus strigoides) are stocky and compact with rounded wings and short legs. They have wide, heavy olive-grey to blackish bills that are hooked at the tip and topped with distinctive tufts of bristles. Their eyes are large, yellow, and frontally placed, a trait shared by owls.

Tawny frogmouths are a widespread species found throughout most of the Australian mainland except in far western Queensland, and most of the Nullabor Plain.

Tawny frogmouths can be found in almost any habitat type including forests and woodlands, scrub and heathland vegetation, and savannahs. However, they do not occur in heavy rainforests and treeless deserts. They are common in suburbs, having adapted to human presence. They have been reported nesting in parks and gardens with trees.

Many birds and mammalian carnivores are known to prey upon the tawny frogmouth. Native birds including ravens, butcherbirds, and currawongs, may attempt or steal the protein rich eggs to feed their own young. Birds of prey such as hobbies and falcons, as well as rodents and tree climbing snakes also cause major damage to the clutches of tawny frogmouths by taking eggs as well as nestlings.

Tawny frogmouths are carnivorous and are considered to be among Australia’s most effective pest control birds as their diet consists largely of species regarded as vermin or pests in houses, farms, and gardens. The bulk of their diet is composed of large nocturnal insects such as moths, as well as spiders, worms, slugs, and snails but also includes a variety of bugs, beetles, wasps, ants, centipedes, millipedes, and scorpions. Large numbers invertebrates are consumed in order to make up sufficient biomass. Small mammals, reptiles, frogs and birds are also eaten.

Tawny frogmouths are large, big-headed birds that can measure from 34 to 53cm centimetres. Weights have been recorded of up to 680g.

Tawny frogmouths form partnerships for life and once established, pairs will usually stay in the same territory for a decade or more. Establishing and maintaining physical contact is an integral part of the lifelong bond. During breeding season, tawny frogmouth pairs roost closely together on the same branch, often with their bodies touching. The male will carry out grooming by gently stroking through the plumage of the female with his beak in sessions that can last for 10 minutes or more.

The breeding season of tawny frogmouths is from August to December, however individuals in arid areas are known to breed in response to heavy rains. Males and females both share in the building of nests by collecting twigs and mouthfuls of leaves and dropping them into position. Nests are usually placed on horizontal forked tree branches and can reach up to 30cm in diameter. Loose sticks are piled together and leaf litter and grass stems are placed to soften the centre. The nests are very fragile and can disintegrate easily.

The clutch size of the tawny frogmouth is one to three eggs. Both sexes share incubation of the eggs during the night whilst during the day, males incubate the eggs. For the duration of the incubation period, the nest is rarely left unattended. One partner will roost on a nearby branch and provide food for the brooding partner. Once hatched, both parents cooperate in the supply of food to the young. The fledging period of the tawny frogmouth is 25 to 35 days during which they develop half their adult mass.

Tawny frogmouths are big-headed stocky birds often mistaken for owls due to their nocturnal habits and similar colouring. The tawny frogmouth is sometimes incorrectly referred to as mopoke, a common name for the southern boobook whose call is often confused for the tawny frogmouths.

One of the best examples of cryptic plumage and mimicry in Australian birds is seen in the tawny frogmouth who perch low on tree branches during the day camouflaged as part of the tree. Their silvery-grey plumage patterned with white, black, and brown streaks and mottles allows them to freeze into the form of a broken tree branch and become practically invisible in broad daylight. The tawny frogmouth will often choose a broken part of a tree branch and perch upon it with its head thrust upwards at an acute angle using its very large, broad beak to emphasise the resemblance. Often a pair will sit together and point their heads upwards, only breaking cover if approached closely to take flight or warn off predators. When threatened, adult tawny frogmouths will make an alarm call that signals to chicks to remain silent and immobile ensuring that the natural camouflage provided by the plumage is not broken.