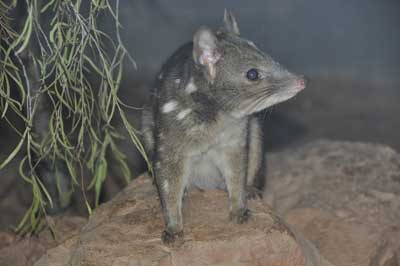 The Western Quoll (Dasyurus geoffroyi) is a rufous grey carnivorous marsupial with white spots on their body and legs but not tail. They are inquisitive and active especially at dusk and before dawn.

Western quolls are solitary animals, except when breeding and individuals require quite large areas of habitat. Their home range must contain suitable den sites and sufficient prey. In Western Australia, for example, each female’s home range is 55 to 120 hectares and is vigorously defended.

When western quolls lived in Central Australia they lived in the desert woodlands and the sand country where they would shelter by day in hollow logs, rock crevices or burrows in the sand.

Formerly present across semi-arid Australia from south Western Australia to western Queensland and New South Wales. Western quolls disappeared from Central Australia between the mid-1930s and early 1950s and are now restricted to the southwest corner of the continent. Many factors have contributed to their decline including competition from feral cats and foxes, land clearing and the reduction of Aboriginal burning practices.

Quolls are carnivores and will eat almost any small animal they can like insects, spiders, mammals, lizards, and frogs. They mainly hunt on the ground but may climb trees to rob bird’s nests.

When there is not much water about, western quolls are able to obtain most of the water they need from their food.

They can save energy by lowering their body temperature several degrees during the daytime when they’re asleep.

Males grow to up to 2kg and females up to 1kg.

Quolls occupy a special place in the ecosystem: at the top of the food chain. Their presence in an area could be regarded as an indicator of environmental quality because their survival relies on adequate suitable prey items being available.

The western quoll used to occur over most of Australia. Now they are only found in the southwest of Western Australia. Arrernte Aboriginal people of Central Australia call them tyelpe (chilpa) and despite being locally extinct they are still associated with many important ceremonies.