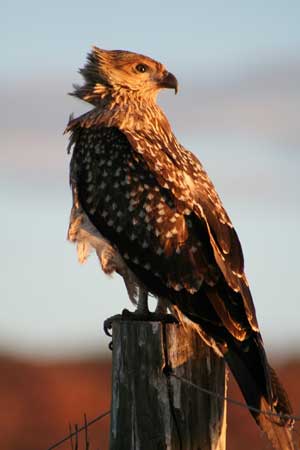 The whistling kite (Haliastur sphenurus) often has a scruffy appearance to its gingery-brown feathers. It can be seen soaring in haphazard circles, with its widely fingered wingtips and fanned tail visible.

In drought periods, the usually sedentary whistling kite will become nomadic to follow food sources. Being a scavenger and eating any kind of carrion (dead meat), also means that it is more adaptable during drought periods when food is scarce.

Whistling kites can be found in a variety of habitats, but in arid regions are usually found in open desert woodlands and along desert rivers.

Whistling kites look most at home while flying: gliding at low altitudes or soaring high in the sky. When not flying they can be seen perched in trees or on fence-posts.

They are found throughout Australia, but more common in the warmer northern parts.

They are common in the north of Australia, rarer in the southern regions.

Whistling kites are mainly scavengers - eating carrion and some live prey including insects (grasshoppers and caterpillars), small reptiles and small mammals such as rodents.

Some claim that whistling kites do not defend their nests aggressively, which would make their eggs and chicks vulnerable to large aerial predators such as black breasted buzzards (Hamirostra melanosternon) and tree climbing reptiles including centralian carpet pythons (Morelia bredli).

In the warmer northern regions of Australia, the whistling kite can breed any time of year (as long as the food supply is abundant). In the cooler southern regions, breeding is from July to November.

Usually the tallest tree available is selected to build the nest, which is built 10 to 30m up. The bulky stick-cup is lined with fresh leaves. The same nest is used year after year, gradually growing larger. The clutch of eggs is usually two to three. The female does most of the incubating, with the chicks hatching after about 40 days.

The whistling kite gets its name from the fact that its voice can often be heard while in flight (and at its nest) making rapid, sharp and penetrating cries.

Unlike their gingery-brown parents, young chicks have short, fluffy, white down.