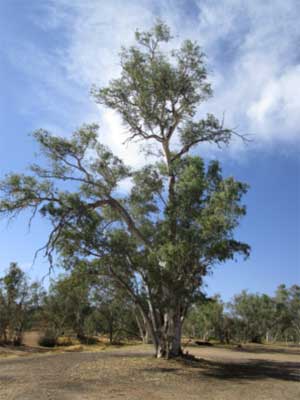 A very large tree growing to 20m, featuring a short, thick trunk and heavy spreading limbs. The bark is pale but has irregular grey, brown and red patches as it peels.

The creamy white flowers appear in clusters during late spring and early summer. They are followed by a small capsule 5 to 8mm across.

The durable, termite resistant timber was used for construction of bridges, wharves and used for railway sleepers and fence posts.

Aboriginal people use this tree for food sources including the lerp and grubs in the roots. The timber was used for making tools and implements such as carrying bowls.

Excellent examples of this tree can be seen in and alongside the Todd River and throughout the area along watercourses. It occurs in all states of Australia and is notorious for dropping large branches. A hollow is often produced on the tree when a branch falls and these are important nesting sites for many parrots including galahs, ringnecks and budgies.

Hundreds of young river red gums were planted throughout the Desert Rivers habitat during the park’s early days.