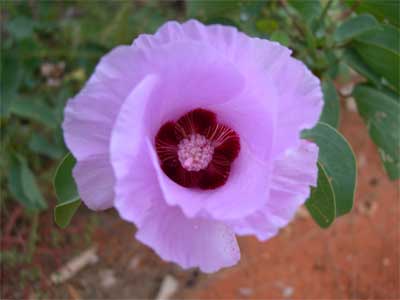 Shrub to 2m in height with beautiful five petalled pale mauve-pink to lilac flowers with a dark red spot at the base. A white petalled variety is also known.

This flower is the floral emblem of the Northern Territory and a stylised version is featured on the Territory flag. It is named after the explorer Charles Sturt.

Grows readily from seed with a hot water soak pre-treatment.

This beautiful plant is located in the Desert Rivers habitat and the visitor centre courtyard.